Happy Global Running Day! I got out there this morning to run 3.5 miles! It sounds great, but I have to admit that it was awful! My calves were tight. There was a pain in my left knee. I sucked bad air. My pace was slower than usual. I had a headache. There are days when a run seems effortless, but that was not the case for me today. Guess what? When I finished, I felt like I had really accomplished something. Friendly people smiled at me as I passed. The sun was shining. A breeze was blowing on my face. I was sweaty and thirsty. It was a beautiful morning for a run- no matter how difficult it was. 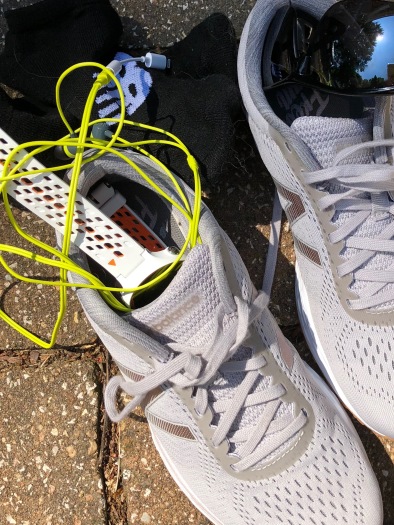 I’m a runner who loves to have music pumping through my earbuds. My husband runs marathons and ultra marathons. Even with those long distances, he enjoys being alone in his thoughts. I’m the opposite. It’s not unusual to hear me singing along or even moving my arms with the beat. I’m unashamed when it comes to my enthusiasm for my favorite songs!

Although I like to create playlists for running, I have been listening to more soundtracks lately. I never tire of the “Hamilton” soundtrack. Sometimes, I play it from the beginning to follow the story as intended. Other times, I’ll shuffle the songs for that surprise element. I’ll admit that “It’s Quiet Uptown” is not the best song for running because that dang song always makes me tear up!

Another great soundtrack for running is “The Greatest Showman.” There’s something about Hugh Jackman- am I right? One thing bugs me with this one, though. The beginnings of several songs are so soft that I can’t hear them at all without adjusting the volume. Who wants to deal with that during a run? I just keep it at a consistent volume and wait for the song to come into hearing range. I’m kind of surprised that this little detail wasn’t caught by some sound engineer or mixer in the studio. Still, it’s amazing music!

I’ve listened to several soundtracks over the past couple of weeks for my runs. “Guardians of the Galaxy 2” is full of great stuff. “Grease” and “Hairspray” are classics. You can’t go wrong with Disney soundtracks, such as “The Lion King” and “Moana.”

Soundtracks are simply a lot of fun to hear during a run. What are some of your favorites? I’d love to add some new ones to my mix.

©  Dianne Schramm and sharing the stairs (2015-present) Unauthorized use and/or duplication of this material without express and written permission from this site’s author and/or owner is strictly prohibited. Excerpts and links may be used, provided that full and clear credit is given to Dianne Schramm and sharing the stairs with appropriate and specific direction to the original content.